Fleas are small flightless insects that form the order Siphonaptera. As external parasites of mammals and birds, they live by consuming the blood of their hosts. Adults are up to about 3 mm (0.12 in) long and usually brown. Bodies flattened sideways enable them to move through their host's fur or feathers; strong claws prevent them from being dislodged. They lack wings, and have mouthparts adapted for piercing skin and sucking blood and hind legs adapted for jumping. The latter enable them to leap a distance of some 50 times their body length, a feat second only to jumps made by froghoppers. Larvae are worm-like with no limbs; they have chewing mouthparts and feed on organic debris.

Over 2,500 species of fleas have been described worldwide. The Siphonaptera are most closely related to the snow scorpionflies (Boreidae), placing them within the endopterygote insect order Mecoptera.

Fleas arose in the early Cretaceous, most likely as ectoparasites of mammals, before moving on to other groups including birds. Each species of flea is more or less a specialist on its host animal species: many species never breed on any other host, though some are less selective. Some families of fleas are exclusive to a single host group: for example, the Malacopsyllidae are found only on armadillos, the Ischnopsyllidae only on bats, and the Chimaeropsyllidae only on elephant shrews. The oriental rat flea, Xenopsylla cheopis, is a vector of Yersinia pestis, the bacterium which causes bubonic plague. The disease was spread by rodents such as the black rat, which were bitten by fleas that then infected humans. Major outbreaks included the Plague of Justinian and the Black Death, both of which killed a sizeable fraction of the world's population.

Fleas are holometabolous insects, going through the four lifecycle stages of egg, larva, pupa, and imago (adult). In most species, neither female nor male fleas are fully mature when they first emerge but must feed on blood before they become capable of reproduction.[3] The first blood meal triggers the maturation of the ovaries in females and the dissolution of the testicular plug in males, and copulation soon follows.[8] Some species breed all year round while others synchronise their activities with their hosts' life cycles or with local environmental factors and climatic conditions.[9] Flea populations consist of roughly 50% eggs, 35% larvae, 10% pupae, and 5% adults.[5]

The number of eggs laid depends on species, with batch sizes ranging from two to several dozen. The total number of eggs produced in a female's lifetime (fecundity) varies from around one hundred to several thousand. In some species, the flea lives in the nest or burrow and the eggs are deposited on the substrate,[8] but in others, the eggs are laid on the host itself and can easily fall off onto the ground. Because of this, areas where the host rests and sleeps become one of the primary habitats of eggs and developing larvae. The eggs take around two days to two weeks to hatch.[5] Experiments have shown that fleas lay more eggs on hosts which have limited food intakes, and that eggs and larvae survive better under these conditions, perhaps because the host's immune system is compromised.[10] 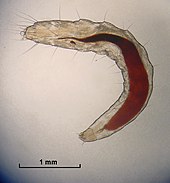 Flea larvae emerge from the eggs to feed on any available organic material such as dead insects, faeces, conspecific eggs, and vegetable matter. In laboratory studies, some dietary diversity seems necessary for proper larval development. Blood-only diets allow only 12% of larvae to mature, whereas blood and yeast or dog chow diets allow almost all larvae to mature.[11] Another study also showed that 90% of larvae matured into adults when the diet included nonviable eggs.[12] They are blind and avoid sunlight, keeping to dark, humid places such as sand or soil, cracks and crevices, under carpets and in bedding.[13]

Given an adequate supply of food, larvae pupate and weave silken cocoons after three larval stages. Within the cocoon, the larva moults for a final time and undergoes metamorphosis into the adult form. This can take just four days, but may take much longer under adverse conditions, and there follows a variable-length stage during which the pre-emergent adult awaits a suitable opportunity to emerge. Trigger factors for emergence include vibrations (including sound), heat (in warm-blooded hosts), and increased levels of carbon dioxide, all of which stimuli may indicate the presence of a suitable host.[5] Large numbers of pre-emergent fleas may be present in otherwise flea-free environments, and the introduction of a suitable host may trigger a mass emergence.[13]

Once the flea reaches adulthood, its primary goal is to find blood and then to reproduce.[14] Female fleas can lay 5000 or more eggs over their life, permitting rapid increase in numbers.[15] Generally speaking, an adult flea only lives for 2 or 3 months. Without a host to provide a blood meal, a flea's life can be as short as a few days. Under ideal conditions of temperature, food supply, and humidity, adult fleas can live for up to a year and a half.[15] Completely developed adult fleas can live for several months without eating, so long as they do not emerge from their puparia. Optimum temperatures for the flea's life cycle are 21 °C to 30 °C (70 °F to 85 °F) and optimum humidity is 70%.[16]

Adult female rabbit fleas, Spilopsyllus cuniculi, can detect the changing levels of cortisol and corticosterone hormones in the rabbit's blood that indicate it is getting close to giving birth. This triggers sexual maturity in the fleas and they start producing eggs. As soon as the baby rabbits are born, the fleas make their way down to them and once on board they start feeding, mating, and laying eggs. After 12 days, the adult fleas make their way back to the mother. They complete this mini-migration every time she gives birth.[16]

We offer free inspections for most pest problems, due to the high demand of bed bug inspections we have a $50 min fee for the inspection. The inspection fee will then be credited towards our service provided making the inspection free. Thank you for your understanding and the opportunity to provide you with the best pest services available.