Reticulitermes flavipes, the eastern subterranean termite is the most common termite found in North America.[1] These termites are the most economically important wood destroying insects in the United States and are classified as pests.[1] They feed on cellulose material such as the structural wood in buildings, wooden fixtures, paper, books, and cotton. A mature colony can range from 20,000 workers to as high as 5 million workers and the primary queen of the colony lays 5,000 to 10,000 eggs per day to add to this total.[1]

Eastern subterranean termites, like other social insects, share resources and divide labor based on a caste system.[1] They live in loosely associated societies called colonies which are composed of both males and females. The termites in the colony are generally organized into the worker caste, the soldier caste, and the reproductive caste.[1] 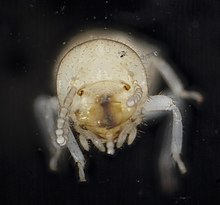 Workers are about 3 mm long and are blind, wingless, soft-bodied, creamy white to grayish-white with a round head.[11] They make up the majority of the termites that actually eat the wood. They are sterile and forage for food and water, construct and repair shelter tubes, feed and groom other termites, care for eggs and young, and participate in colony defense.[12]

Soldier termites are also wingless and resemble workers except that they have a large, rectangular, yellowish-brown head with long black mandibles. The soldiers’ primary function is colony defense [1] and the mandibles are mainly used for crushing enemy ants which may invade the colony. Additionally, R. flavipes has a fontanelle (frontal gland pore) on the forehead from which it secretes a blend of terpenoid compounds. These secretions are synthesised de novo and are also used to defend the colony from predators such as ants.[13] The soldier caste only makes up 1 to 2% of the entire colony. The soldiers are not capable of feeding themselves and rely on the worker termites to provide them with regurgitated food.[1] 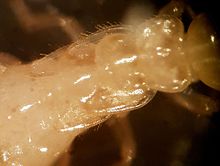 Wing buds of a nymph

Immature termites on the sexual, or reproductive, line are called nymphs and can be distinguished from workers by the presence of wing buds. Under natural conditions, the work that they do in the nest is negligible compared to that done by workers. They can feed themselves, but there is debate over how long (over how many instars) they retain this ability.[14]

Alates (from the Latin ālātus, "having wings") are winged, sexually mature adults that are capable of dispersal and outbreeding. In R. flavipes, they are 8.5-10mm in length to the tips of their wings[15] and have compound eyes, ocelli, and a dark brown to black fully sclerotized cuticle.[16] As the species name suggests (flāvī, "yellow" + pēs, "foot"), the tarsi are yellowish.[17] To distinguish R. flavipes from similar species (at least in the United States), the position of the ocelli can be used: looking at the head from the side, the distance between the ocellus and the nearest compound eye is at least as large as the diameter of the ocellus.[15][17]

Alates always develop from nymphs, with the last nymphal stage characterised by particularly long wing buds. After leaving their nests and swarming, male and female alates pair, shed their wings, begin excavating a new nest, and mate. From this point onward, they are called kings and queens, dealates, or primary reproductives.[14] 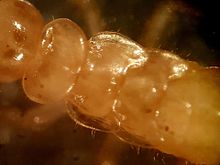 Wing buds of a brachypterous neotenic

Brachypterous neotenics, which are common in the French population of R. flavipes (formerly R. santonensis), and possibly other populations as well, develop from nymphs via a nymph-like pre-brachypterous neotenic stage.[14] They can be distinguished from nymphs by their shorter wing buds (brachy-, "short" + -pterous, "having wings"), darker pigmentation, slight sclerotization, and longer abdomens. Like alates, brachypterous neotenics also have compound eyes and ocelli. Female neotenics lay eggs at a lower rate than queens, but when present in large numbers, they may play a significant role in the growth of the colony.[14]

We offer free inspections for most pest problems, due to the high demand of bed bug inspections we have a $50 min fee for the inspection. The inspection fee will then be credited towards our service provided making the inspection free. Thank you for your understanding and the opportunity to provide you with the best pest services available.